I’m re-charging in my hotel room after a jam-packed day of being a tourist in Medellin, Colombia when a Tweet catches my attention.

I click on the Globe’s link and read about the Don Valley Cable Car, a private initiative to connect the Evergreen Brick Works, an environmental community centre, with Broadview-Danforth Subway Station.

I’ve lived in Toronto on-and-off since 2009 and never owned a car. For me, the more options to get around the city without a car, the better!

Yet I’ve never imagined a cable car as a method of urban transit. (The only gondola rides I’d ever taken were to get me to the top of a ski hill!)

In fact, when I lived in London, UK, after a few early-morning frustrations with the Tube, I wondered, “If Only I Could Take a Chair-Lift To Work…At the time, I didn’t realize that people living in Medellin, and several other cities worldwide, already do!

The Don Valley Cable Car is just beginning community consultations at a time when Toronto’s SmartTrack transit plan is getting smaller and cheaper. Although the Don Valley Cable Car is being proposed as a method of connecting both tourists and residents with urban greenspace, rather than at connecting low-income communities with better transit access as Medellin does, it’s a reminder that alternative methods for urban transit are possible.

According to research from York University, there is a “transit inequity” in Toronto, as the people who are most dependent on public transit, particularly those living in low-income, inner-suburb neighbourhoods, referred to as “transit deserts,” get the worst service. The study suggests that more recent transit infrastructure expansions have primarily benefited the rich living in areas of the city which are already thriving, while neglecting the inner suburbs.

Ironically, I’m learning about the proposed Don Valley Cable Car immediately after spending most of the afternoon riding Medellin’s Metrocable. All of my previous knowledge about Medellin has come from watching Narcos: crime, drugs, violence and Pablo Escobar.  So I’m surprised by the city’s innovative approach to public transit, for which it won the 2012 Sustainable Transport Award (tied with San Francisco, USA).

The Metrocable opened in 2004 in response to significant spatial inequalities in transit access in Medellin. It connects low-income neighbourhoods located in the surrounding mountains, many of which had high rates of violence and crime, with the city centre. A 2014 study published in the Journal of Transport Geography, found that the Metrocable has doubled access to employment opportunities for residents living in low-income neighbourhoods. Another report, found that the neighbourhoods affected by the Metrocable Line K experienced a 66% faster decline in homicide rates than in the control neighbourhood. (Although both violence and homicide rates decreased dramatically for both groups).

These studies suggest that expanding public transit through alternative means can transform a city’s poorest and most violent areas.

Medellin has also targeted several social interventions in the neighbourhoods linked with the Metrocable. This includes support for social housing, schools, micro-enterprise, libraries, and implementation of additional lighting in public spaces. In addition, the city has involved local residents in participatory budgeting to determine how to allocate the funds designated for investment in their neighbourhoods. 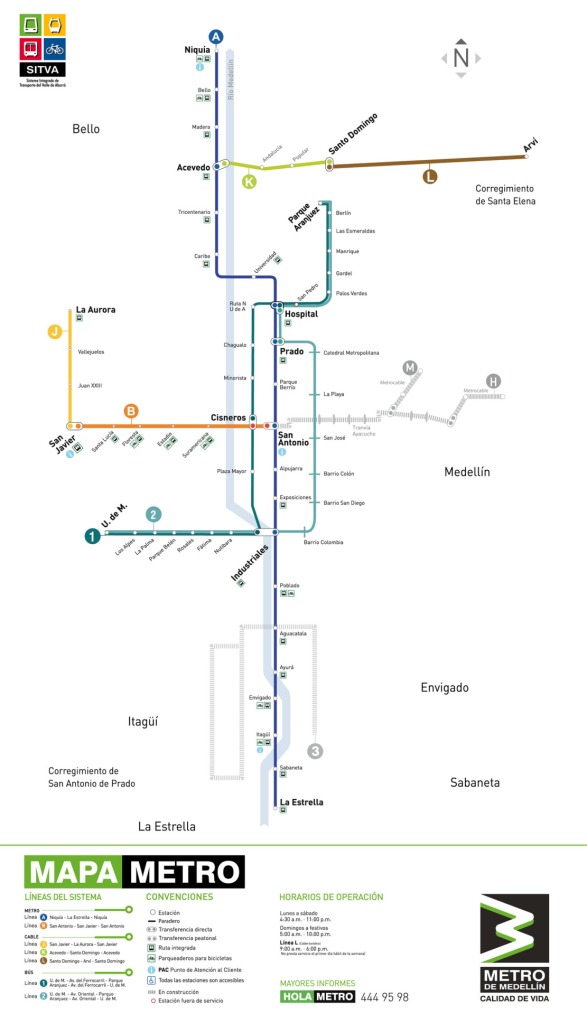 As the world’s first modern urban aerial cable car transport system, the Medellin Metrocable presents an inspiring vision for how a city’s transit plan can be re-imagined to create stronger, healthier communities, and better life-opportunities for its residents.

It is an example for cities, like Toronto, that bold visions for affordable and sustainable public transit are possible and are already being lived out in cities around the world.