To celebrate my upcoming book launch for See What Flowers, I’m offering a FREE five day promotional giveaway of the ebook.

See What Flowers is a novel about love and mental illness, and currently has a 5 star rating on both Amazon and Goodreads.

Click here to download your free ebook. If you like it, there are many ways that you can help me promote the book. Thank you so much! Happy reading! 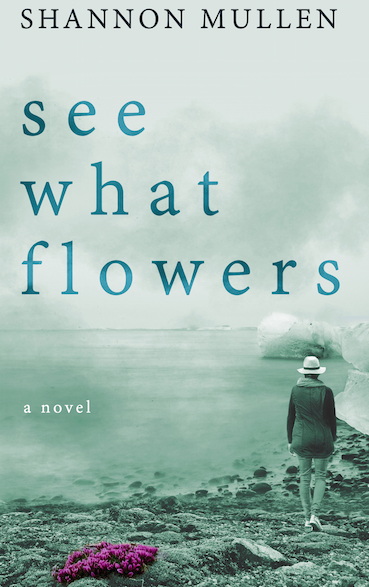 My début novel, See What Flowers, is on the shelves! How cool is it to see my own book standing beside some of the great novels (well, I DID place it beside them)?!?!

Ways you can get a copy of the paperback version of See What Flowers:

If you DO read See What Flowers, there are a few ways you can help me promote the book:

Since I was a little girl, swept away by books such as Anne of Green Gables, Little Women, and The Hobbit, I’ve dreamed of publishing a book.

Today I published a book!

Hardcopies will also be available to purchase at the Toronto Book Launch on Thursday, June 15 at 7:30pm at The Steady Cafe and Bar, located at 1051 Bloor St W.

Thank you to everyone who supported me through this process.

If you read See What Flowers, I would appreciate if you could please write a customer review on Amazon. This helps with the book’s ratings and can give greater exposure to the book. Thank you!

This time next week, See What Flowers, my début novel about love and mental illness, will be available on Amazon.

Here’s a sneak preview of See What Flowers to give you a feel for what the book’s about.

“Struggling and suffering are the essence of a life worth living. If you’re not pushing yourself beyond the comfort zone, if you’re not demanding more from yourself – expanding and learning as you go – you’re choosing a numb existence. You’re denying yourself an extraordinary trip.”

The party is over. I’m floating weightlessly through the sky like Mary Poppins, grasping my flamingo pink birthday balloons so tightly that my nails puncture the skin of my sweaty palm.

Startled by the sound of myself giggling, I release the balloons. They float to the ceiling as my feet hit the floor but the giggling doesn’t stop. Instead, it becomes louder, more honest: the yelp of a dog off-leash, the squeal of a toddler chasing butterflies, the height of sexual pleasure, the subconscious release of something raw and visceral, something undeniably, yet unexplainably true.

It’s like I’ve pierced a small hole in the balloon, sucked in the helium and exhaled delirium. I’m under the effect of something, certainly too much Malbec, but perhaps also too much happiness.

After more than a decade of cramming for exams, late nights at the library, taking risks, and making tough decisions, I’ve become lighter, like in the way sticking to a running program burns excess fat. The lightness teaches me that struggle lifts us up rather than weighs us down.

I take a blue recycling bag from underneath the sink and start cleaning up empty tall cans–Steam Whistle, Mill St., Muskoka, Great Lakes, Kichesippi and other Ontario Craft beers that I’ve never seen before. Every time I go to the Beer Store, there’s a new microbrew on the market. With so much competition, what makes one product last and another disappear? By the time I’ve tossed a dozen or so empties into the recycling bag, the giggling has stopped and I’m overcome with exhaustion. I check the time on my phone. 3:30 am. There’s a missed call from Adam. Where is he?

Adam will be upset that I already washed all of the dishes—the plates and forks we used to serve my DQ cake, the wine glasses, and the Starbucks mug that that Katie used for her cab sav because we ran out of glasses. Adam wouldn’t make me clean up a mess on my birthday. He’d remind me that a real partner shares the responsibility, and that since I’m the BDG, I deserve to let him pull the weight.

I tug on the ribbon dangling from one of the balloons floating against the ceiling. I want to set it free, let it fly into the wild like a caged parrot being released in the jungle, so I put the recycling bag on the floor and collect the ribbons from all three balloons. How high will they soar before bursting to the ground? Fingers crossed these balloons will drift higher and higher and higher into a limitless universe.

I shiver slightly as a draft of cold air floods the apartment the second the front door opens, like winter has suddenly arrived even though summer’s just around the corner.

I spin around to see who it is. I already know.

He’s holding a couple of pink tulips in his hand, freshly picked from the neighbours’ garden. His eyes are glowing with the droopy haze of booze and he looks like a maniac, a wild dog. We are both high on the energy of the party and the awareness that we are on the brink of something wonderful. As I float towards him, a nagging question tugs me back; I want to swat it away like an annoying mosquito. But it keeps buzzing inside me. I shiver again.

Is there such a thing as being too happy?

He hands me the tulips, luscious lips in full bloom. As I accept the flowers, I release my grip on the balloons, and they bounce gently against the ceiling the way they did before—hovering, annoyed, frustrated, contained by the ceiling and disappointed by the limits of life.

He hugs me tightly and an electric current shoots through me as though he’s resuscitating a heart that’s already beating. We hold each other, our bodies linking in the courtship ritual of dragonflies, our brilliant green darners hover as one above our apartment.

“This is the happiest I’ve ever been,” I whisper.

The Steady Café and Bar

Copies of See What Flowers will be available to purchase for $20.

The evening will include Q & A with writer Louise Johnson and musical performance by Keira Loukes.

This is a public event, so feel free to bring along friends and family members!